The nation’s capital was segregated when the Lincoln Theatre first opened its magnificent doors 100 years ago, and it quickly established itself as the cultural epicenter of what came to be known as “Black Broadway” – predating and influencing Harlem’s renaissance. Touted by The Afro-American newspaper at the time as “perhaps the largest and finest theater for colored people exclusively anywhere in the U.S.,” the building has catered to artists, presidents, cinema stars, boxers, and hundreds of thousands of Washingtonians alike.

The neoclassical-style theater was commissioned and operated by local theater magnate Harry Crandall and designed by architect Reginald Geare. Initially conceived and built as a segregated movie house for Washington’s Black clientele, the theater brought the latest top Hollywood films directly to a previously underserved audience.

The Lincoln Theatre was sold to A.E. Lichtman in 1927, and the theater, which was originally constructed in the era of silent films and vaudeville, was first wired for sound in 1928. At the same time, a dance hall was added – the Lincoln Colonnade – which actively supported community organizations, charities, and universities while hosting legendary performances night after night, establishing the theatre’s place as the “Crown Jewel of U.” Notably, of Lichtman’s 434 employees, 423 – including managers and supervisors – were Black.

The U Street Corridor not only served as a center of culture and life for Washington’s Black community, but also drew and influenced Black audiences across America, with the Lincoln Theatre even inspiring a poem by the great Langston Hughes called Lincoln Theatre. With banks, bowling alleys, dance halls, cabarets, movie houses, restaurants, skating rinks, and many other neighborhood businesses being built for, managed by, and in some cases owned by Black Americans in the time of segregation, actress and singer Pearl Bailey dubbed the neighborhood “Black Broadway,” and the name stuck.

As DC began to integrate in the 1950s, the premier establishments along “Black Broadway” found new competition with Washington’s previously exclusively White venues. The Lincoln Theatre installed a television-projection system to show prizefights in 1952 to compete, though the downturn continued, leading to the destruction of the Colonnade shortly thereafter.

Much of the neighborhood, including the Lincoln Theatre, sustained damage during the unrest that followed the assassination of Martin Luther King Jr. in 1968, increasing the theatre’s struggles. In 1978 the movie house was divided into two theatres, renamed the Lincoln Twin, and began showing all-night movies on weekends. The Lincoln was then sold and closed for renovation in 1983, remaining dark for a full decade as the restoration process faltered.

During this time The Lincoln Theatre Foundation was established to fight for its preservation, successfully filing to have the building placed on the National Register of Historic Places. The restoration was eventually completed with financial assistance from the District of Columbia, returning the building to much of its original eclectic appearance with restored Victorian, Neo-Classical, and Art-Deco details. The 1250-seat Lincoln Theatre reopened on February 4th, 1994 with a performance of Barry Scott’s Ain’t Got Long to Stay Here, the playwright-actor’s monodrama about Martin Luther King, Jr.

By the 2010s, the venue’s bookings had again slowed – to breathe more life into the historic gem, the District of Columbia conducted a search for a new operator and selected I.M.P., Washington, D.C.’s largest independent promoter and owner of the legendary 9:30 Club (named the Top Club by Rolling Stone, Billboard and Pollstar) to operate the theatre in June 2013.

Since taking over operations, I.M.P. has reinvigorated the Lincoln Theatre with a complete calendar of events, upgrading the theatre with a state-of-the-art sound and lighting system and hosting an astounding 1,000 shows, attracting more than 600,000 patrons.

Under I.M.P.’s management the Lincoln Theatre has welcomed artists from Kendrick Lamar and Janelle Monáe to Brian Wilson and Emmylou Harris, hosted conversations with public figures from Bob Woodward and Margaret Atwood to Ta-Nehisi Coates and Rupi Kaur, taped specials from comedians like Trevor Noah and Demitri Martin, celebrated the holidays with Smokey Robinson, Patti LaBelle, and Gladys Knight, and produced an MSNBC special with President Barack Obama in November 2020. 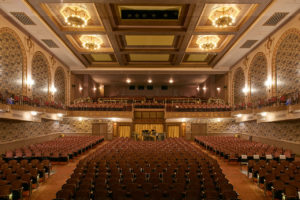